Last weekend was spent putting up the new fence aroud the bottom of the garden. It's good to have the garden bact to being enclosed. 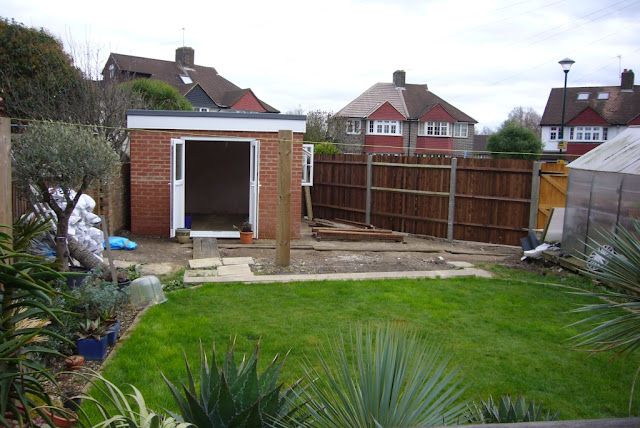 Now comes the work designing that end of the garden. So this week was spent measuring, drawing and going through different options. The first decision is what to do about the greenhouse.  The idea is to build a lean-to in the space next to the workshop. 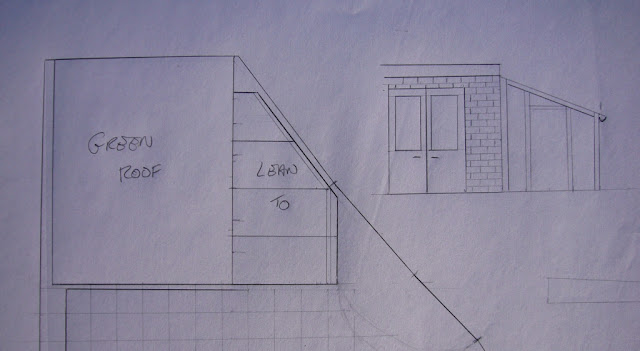 We went through several options for the size; continue to the corner, or stop and allow space for planting or a bin store.  As this smaller design is still bigger than the current greenhouse it will be good to use the remaining space for planting.

Then onto the lawn.  Lawns are always contentious, too big, too small, requiring too much water.  I like our little lawn, and the dog likes it even more.  The original idea was to extend it slightly up to the railway sleeper hammock post. Looking at this on the scale drawings it was all a bit square. I quite liked it but my better half wanted more curves, so we are playing around with ideas to add some curves. 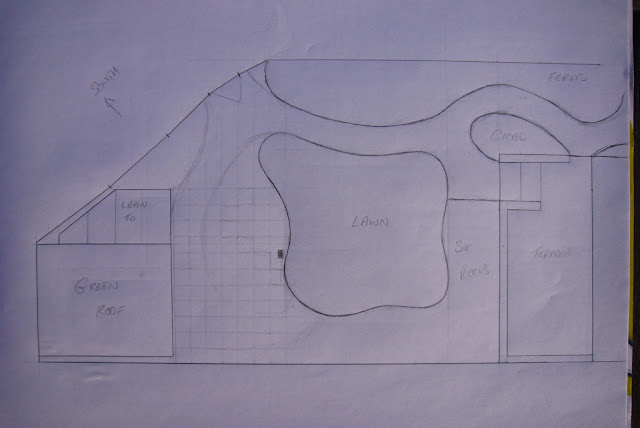 If nothing else this has given us a scale drawing of the garden to play with.  The right hand side is all planted and can't be changed due to be all the builders rubble and being full of the succulents.  So the question is how to make the new bit work with this.   No doubt there will be a few different designs put other there.

In the mean time, two gardening friends came over and had a nosy around.  They are both garden designers, so I got them to draw what it could look like. It was really interesting to see two different options.  One was very minimal, neat, ordered and how I like to see myself.  The other was slightly more relaxed, and practical to cope with how I am actual am.  The picture of the minimal one hasn't come out, but this is the other. 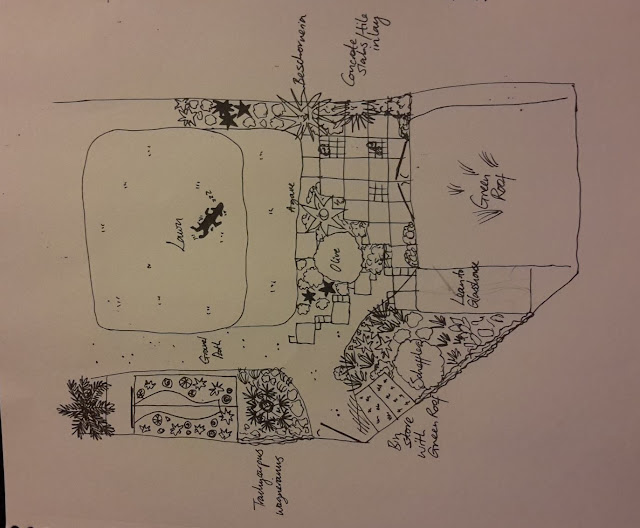 It still has the square lawn, but it is amazing what a diferent seeing it with rough planting makes.  I have yet to master the whole drawing plants like this.  It looks so simple, but usually goes horribly wrong when I try.

I think the next stage will be to select the paving, then I can decide how to do the patio and how to balance the sleak vs realistic designs.  Let's face it, any empty space risks being filled with pots!  The garden orientation means hopefully the terrace outside the workshop will be a little more shaded, we may put a sail over it in summer to ensure there is somewhere to sit out of the sun.

So the summer looks likes being lots of little projects:
That should keep me busy, especially as there will be the usual re-potting and looking after the pots to fit in.
Posted by Spiky Obsession at 19:24 3 comments:

Email ThisBlogThis!Share to TwitterShare to FacebookShare to Pinterest
Labels: Workshop

New year and a new project

I'm back from my winter hybination of not thinking about plants or computers. Today was such a lovely day, I thought it was perfect for my first post of the year.

March is my least favourite month; just when you think winter is over and your plants have made it through, the last grips of cold and wet mean things take a turn for the worse.  I am keeping a close eye on the forcasts to watch out for any real cold or long periods of wet, but until then the garden has been uncovered. Forgive the mess on the terrace, more on that later.  The plants don't look at all bad, one agave filifera is going to need a big hair cut, and the agave nigras look a little worse for ware but that's it.  The agave nigras are starting to annoy me,  they were fine at the last house, but here just have to be cut back each year and are just starting to look good when we get to next winter.  May be time for a re-think on them.

The main group of agaves looks great with no damage. 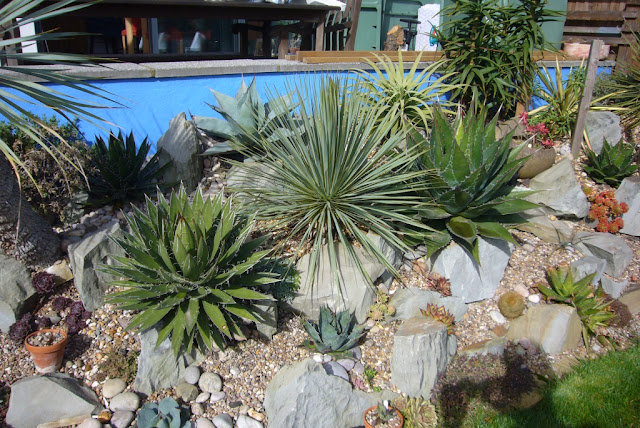 I am especially pleased that agave parryi hk1684 is looking so good. 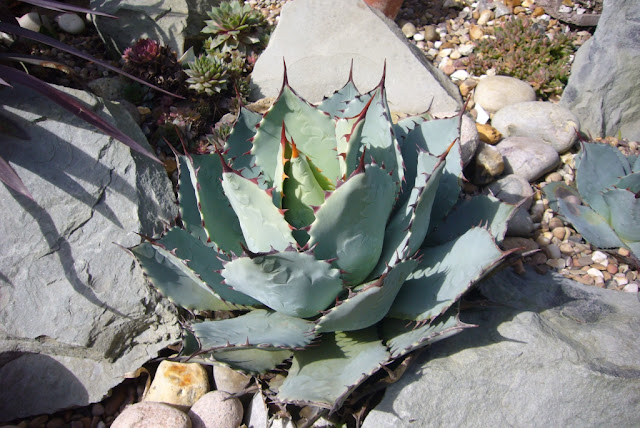 The aloe saponaria variegates seem untroubled by this winter.  We had two weeks of cold, but it was very dry and sunny at the same time, this obviously helped. 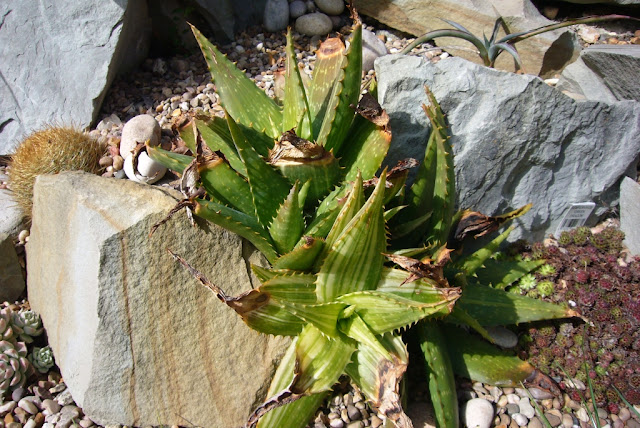 I may have to split them this year, keeping the best and moving the less interesting ones. 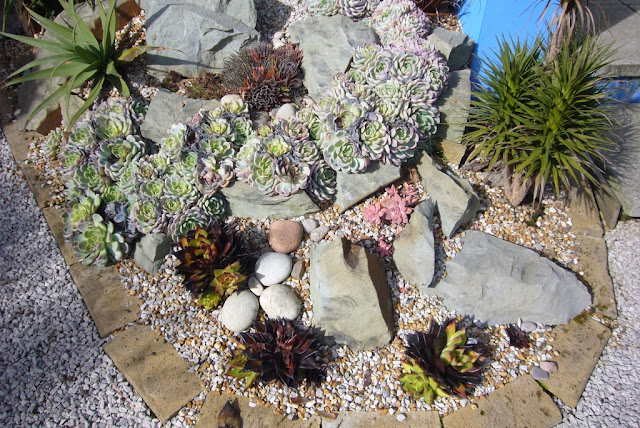 I took all the dead leaves off, and will see what happens this year.  They just don't seem to have much wet tolerance, the ones under a cloch were fine and totally undamaged. Such a shame as they are great plants when large and I was really hoping to have a row of big plants.

Anyway the big news as mentioned earlier is the new project.  Up until 3 weeks ago the view from the terrace was of this: 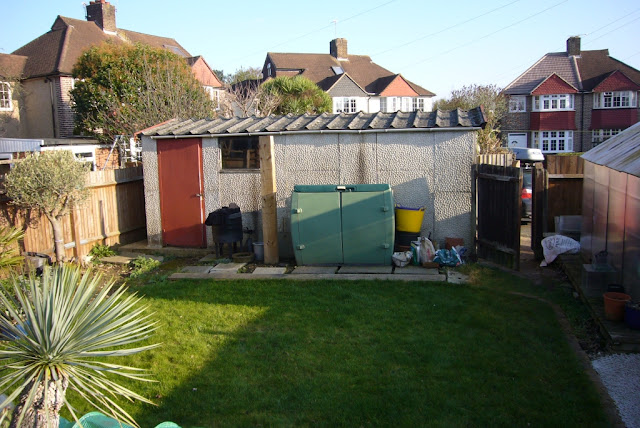 The garage, which apart from being ugly and too large, restricted access to a section of garden behind it, so time for the next stage in the garden plan. 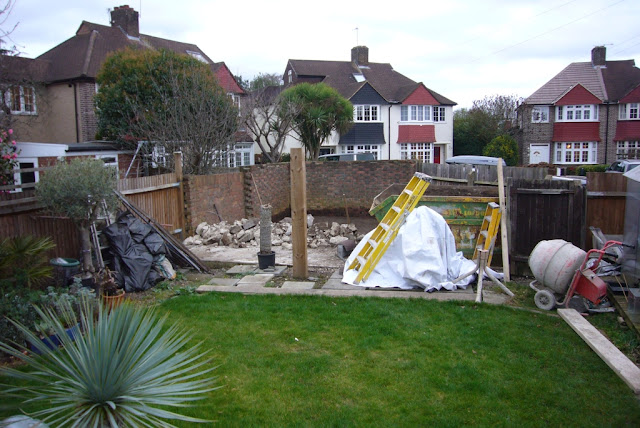 Remove the old garage and the concrete pad to give an extra 3m of garden, and build a new smaller workshop behind. 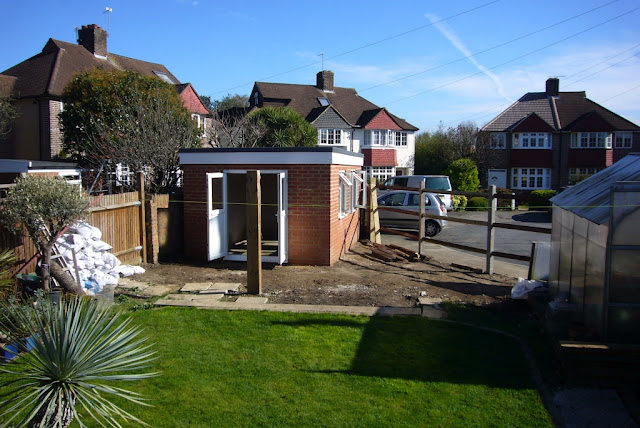 It is great to have 3m more garden to play with, plus a little bit to the side of the new workshop.  Hopefully this will allow the final stages of the original garden design to fall into place.  No longer will the path end half way down the garden, or the olive have to sit in its pot waiting for a spot to be planted.

The most exciting part is the roof. 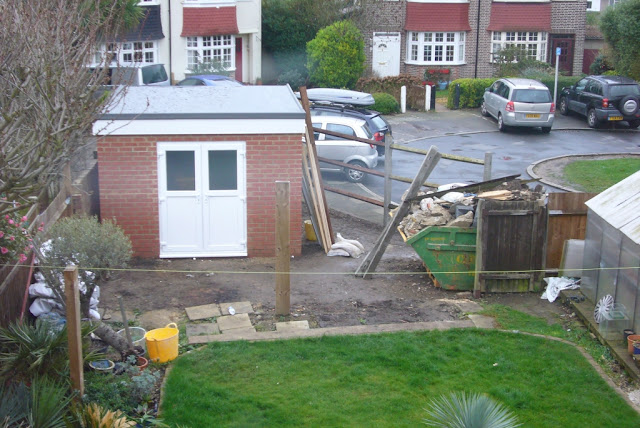 The idea is for a green roof, some hybrid between a traditional sedum matt and a more lush grass roof. Now I just need to figure out what I want and how much to allow space for growth or go for  instant impact.  Either way there will be regular updates as my plans progress.

Sadly the less interesting bits have to be sorted first, it will be a mud bath down there if the paths aren't put in. It makes sense to do the landscaping first and save the roof until all that is finished.  It will give me something to look forward to.

It's going to be a busy year.