So as those of you who have followed for a while will know, I LOVE mangaves.  Sadly in the UK these are few and far between. So, over the last couple of years I have made a concerted effort to get as many as possible, including a shared order to Plant Delights nursery in the USA. It has been a successful couple of years and I now have over 30 varieties. 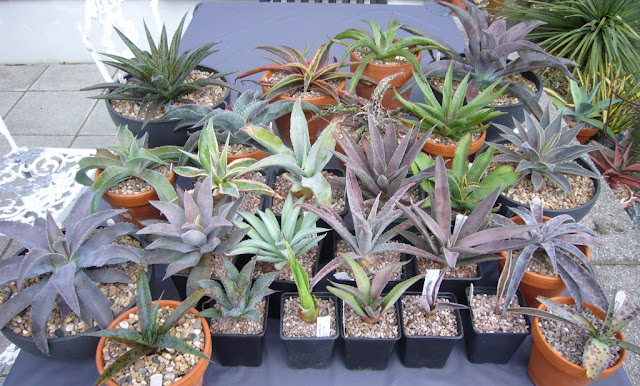 So time for an update on all the mangaves and manfredas, it may be a little photo heavy.

Where to start, the first plants were the manfredas. There used to be a lot more, but I managed to leave most at the last house.  There are two forms of manfreda undulata: chocolate chips and cherry chocolate chips which was new this summer.  The chocolate chips flowered last spring which set the plant back, but at least it has produced offsets. 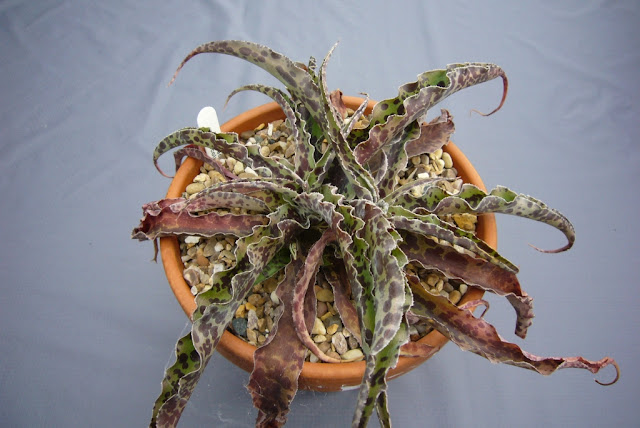 They need a good re-pot, maybe come spring. I overwinter them in an unheated greenhouse and they have been fine down to -7c when kept totally dry.  I'm not sure they would like it any colder.

Then there is the manfreda guttata that flowered over last winter. 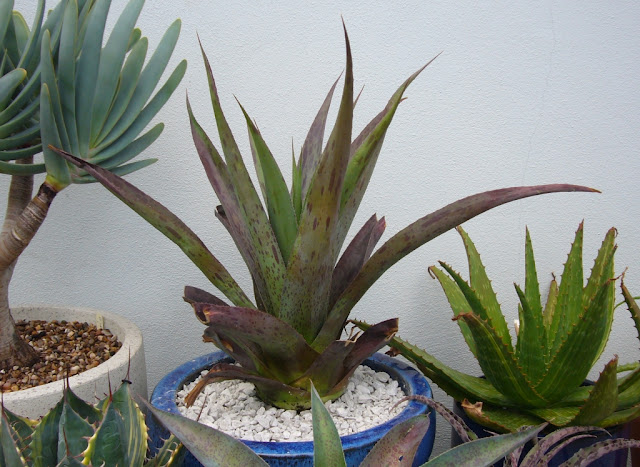 The flower started at this time last year, it flowered once, then a second time, then a third and then bulbils appeared on the stalk, so it really is the flower that keeps on giving . 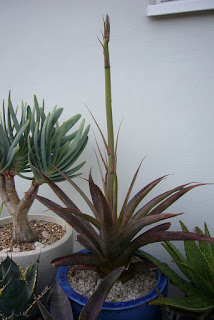 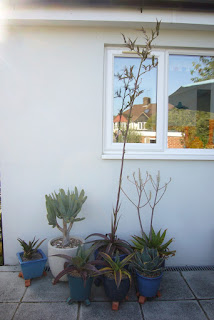 Again it seems fine if kept dry over winter, so I've 3 planted out at various places around the rockery. The bulbils and offsets mean I have a lot of these now.

The manfreda maculosa below is new this summer. 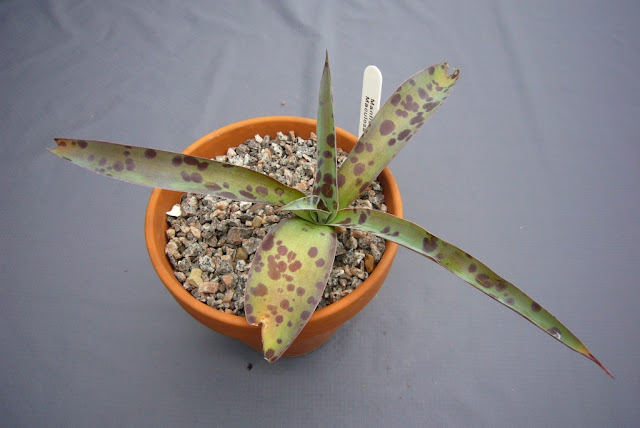 The last one seems to be listed as manfreda or mangave guttata "jaguar".  Again a new one this summer. It has been slow to settle in but is finally starting to grow.  It's supposed to be one that would cope outside in London suburbs, but will be pampered this winter and planted out once I have spares. 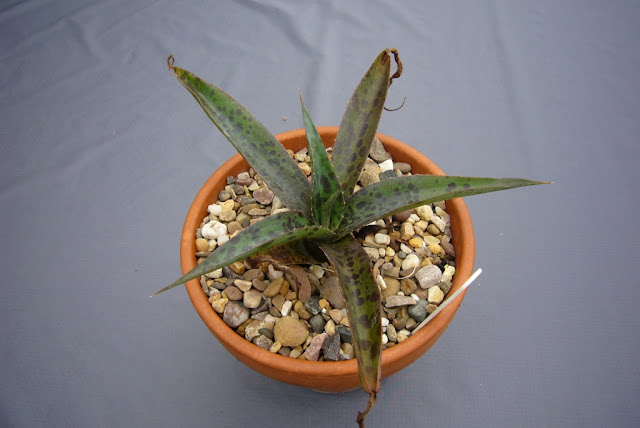 The ones that were left behind were manfreda virginica which was planted in the garden for about 3 years and a form of manfreda guttata called "Spot" which as the name suggests has larger spots.  If you have either of these to trade please let me know.

Onto the mangaves.  There are two that you can get relatively easily in the UK: mangave bloodspot and magave macho mocha. I have two m. bloodspots. 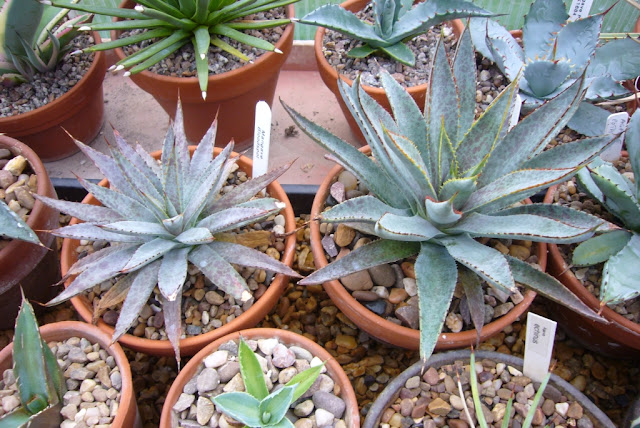 The plant on the left I've had for years and it's never actually grown.  I now know that it's probably to little space and water that is the issue. The one on the right was new this summer and is a slightly different colour and grows at a much more managave like rate. 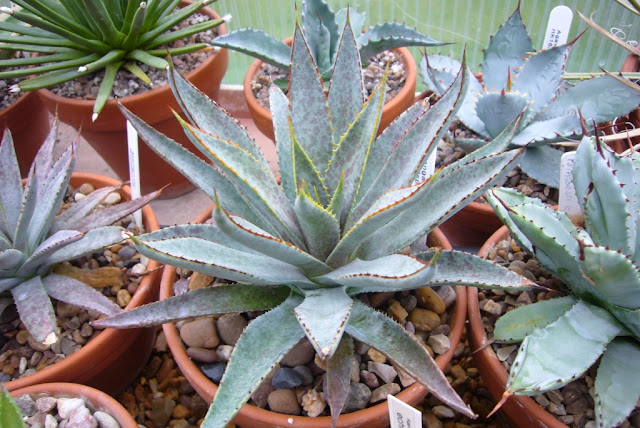 They seem to be fine in my unheated greenhouse so will be there again.  If I ever get another I'll try one outside as I've heard of others in the the UK doing well in the ground.

The same goes for mangave macho mocha.  Since last year I have been treating the mangaves less like agaves and giving them more water and space.  The result has been dramatic and it has easily doubled in size. Finally looking like the stunning plant I've seen in photos. 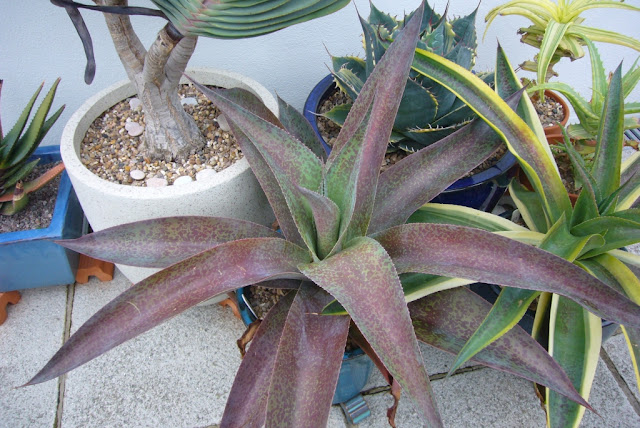 You can see in the photo that I also have the variegated form mangave espresso. 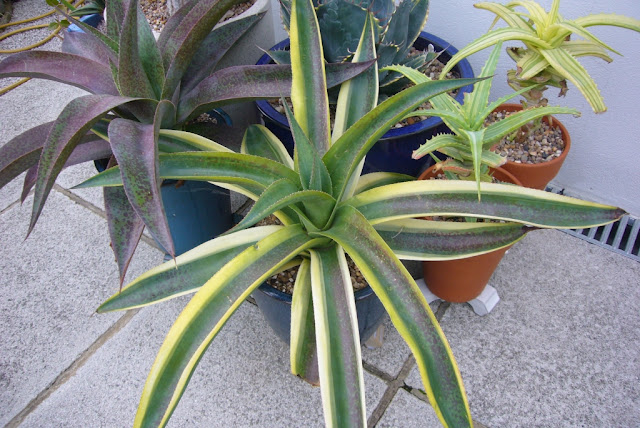 The variegation is definitely stronger in bright sunlight, almost losing it in the greenhouse over winter.

During the search for new plants, a friend announced he had an un-named form, he said it hasn't done much for him, and sure enough it has sat there for me refusing to budge. 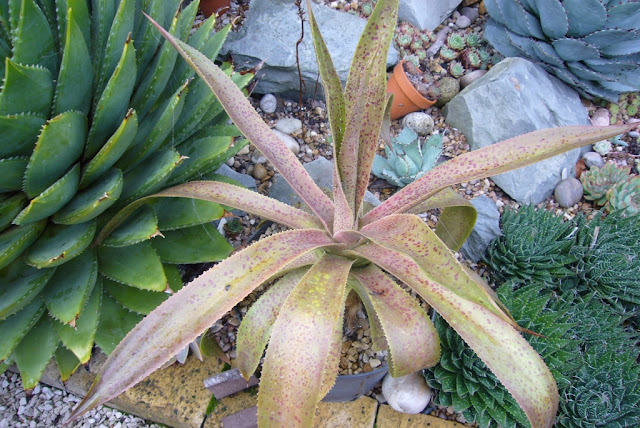 So the UK mangaves. My good friend Paul produced two before he died. They are nice compact plants, making them good for a small garden. They also offset nicely so over the years I have been giving them to good friends and trading to collectors.  They are both crosses with agave obscura (is that the old or new name I can never remember). The first is a. obscura x manfreda maculosa. 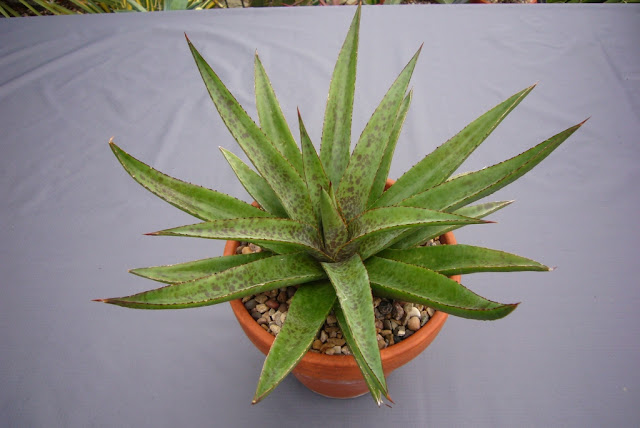 It has a nice upright form and the leaves have a triangular shape to them as you can see the brighter the light the better the spotting.

The second is a. obscura crossed with manfreda virginica.  This as you would expect has longer more drooping leaves. 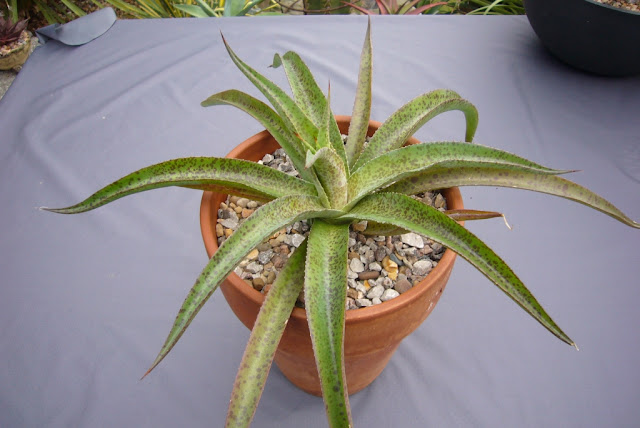 These are marginal for me, in terms of hardiness.  Even kept dry they suffer in a bad winter, although they do come back.  This one flowered last spring and had nice compact flowers, not as big or many as agaves, but better than manfredas. 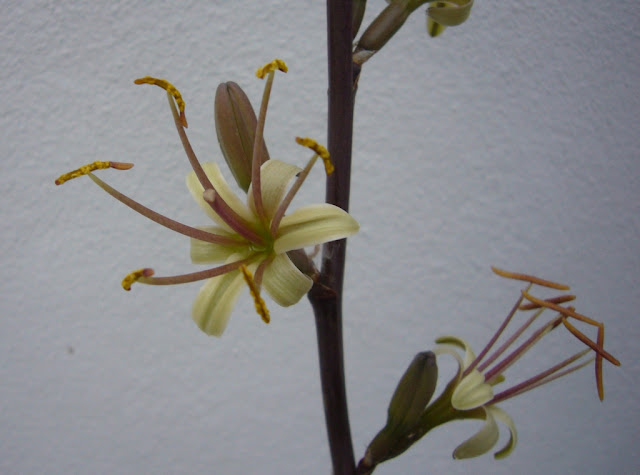 A friend had two agaves in flower at the time; agave mitis, and a suspected horrida.  I managed to get pollen from both and hand pollinated the flowers.  The seedlings are now at the end of their first summer, and out of 40 that germinated I managed to keep 18 alive. 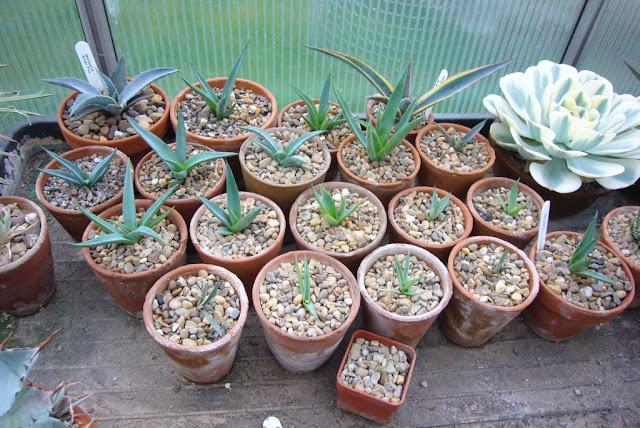 There now seem to two distinct forms: the mitis ones 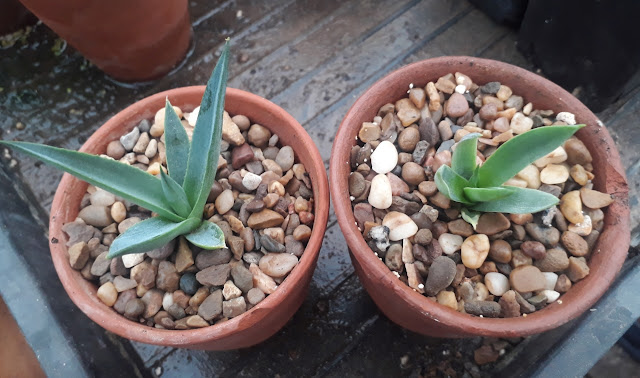 The second form is perhaps the more interesting, it has a good blue colour, nice spines and more upright shape. 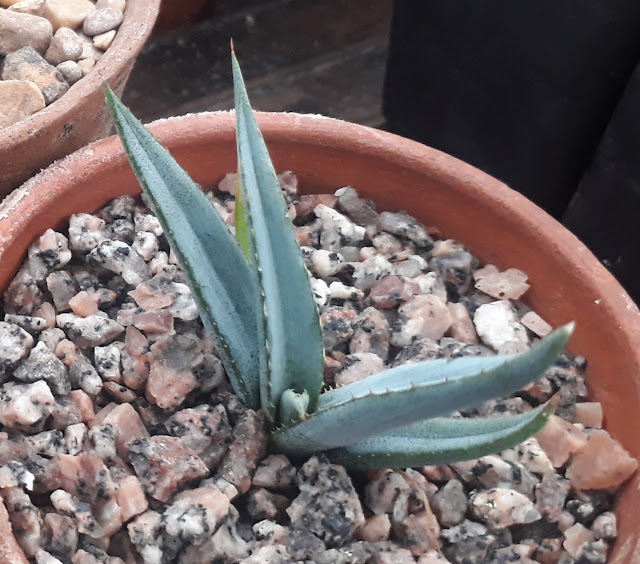 Next year should see these properly develop and then I can decide which ones are worth growing on. Either way I'm excited about having my own mangaves and maybe even naming them if they show promise. As both agave parents are planted out in the UK so hopefully the offspring will have some hardiness.

Then through contacts the Walters Gardens forms started to arrive. If you don't know them, go to Mad About Mangaves page (link here) and look at the amazing variety of mangaves they have produced. Most of the forms from now on originate from this amazing mangave producer. The first lot started arriving last summer, in no particular order.

Mangave bad hair day. I'm still undecided on this one, it probably gave me the most trouble. Firstly it didn't like being inside over winter, so had to be moved into the greenhouse. The it didn't seem to like being in a pot.  So finally given it is supposed hardiness I planted in the new rockery. 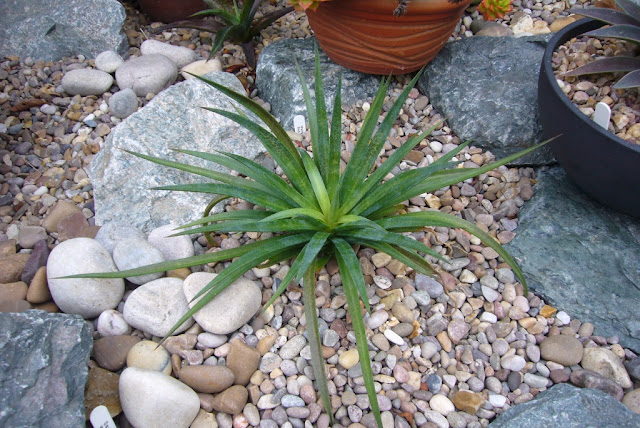 It is perfectly happy, but given its form I can't decide if it works in the ground or should be put back in a pot. What it does have going for it, is that it should be totally hardy for me.

The mangaves seem to fit into different groups around leaf shape, colour and offsets.  I had thought the wavy leaf forms would be some of my favourites they have proved to be quite slow growing and a little awkward to decide how to pot. The first two that turned up were mangave catch a wave and mangave falling water. They both behave very similarly, I would say a medium growth rate, not offsetting.

First up mangave catch a wave. 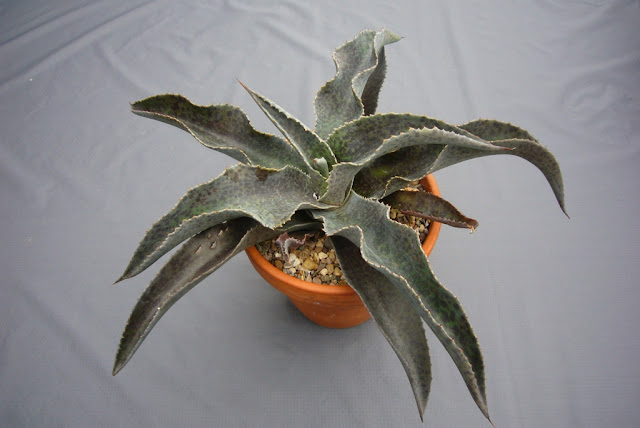 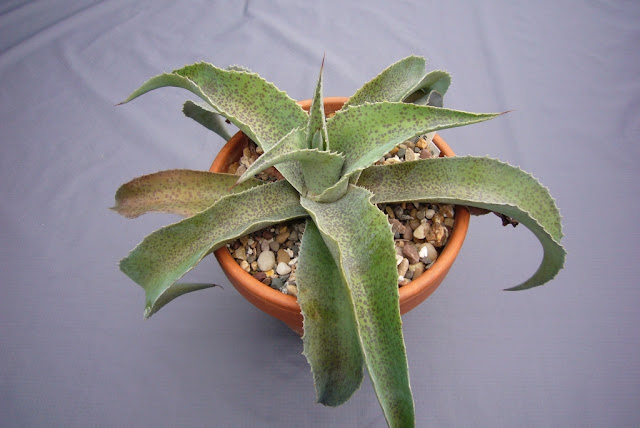 I'm guessing these two may be ones that improve as they get bigger.

Not all the plants have been so restrained, mangave kaleidoscope seems to want to take over the garden, I only got it in August last year and have already taken off four offset and there are 3 more. 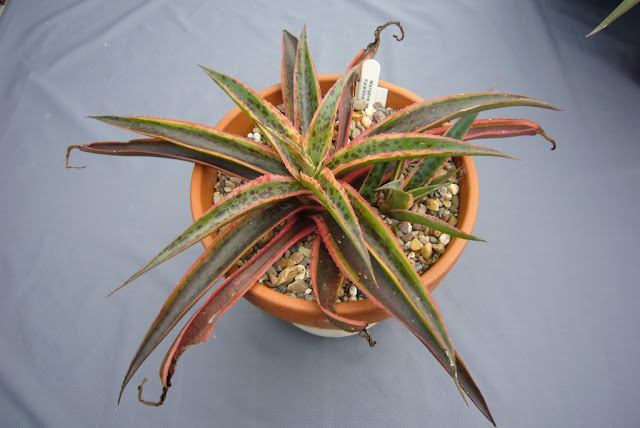 I wish it would put more effect into growing and less into offsets, but it's getting there. It is another one that I want to test for hardiness, not that is is listed as totally hardy for me, but I have so many offsets I can afford to test the main plant. Again like m. bad hair day it probably needs to be in a pot where it can flop over in a natural way.

Those that know me won't be surprised by my view of the looser less structured forms, I do like the structural plants and this runs through all my succulents.  The exception in the first set of mangaves is m. moon glow.  The reason is the colour, even young it really lives up to its name. 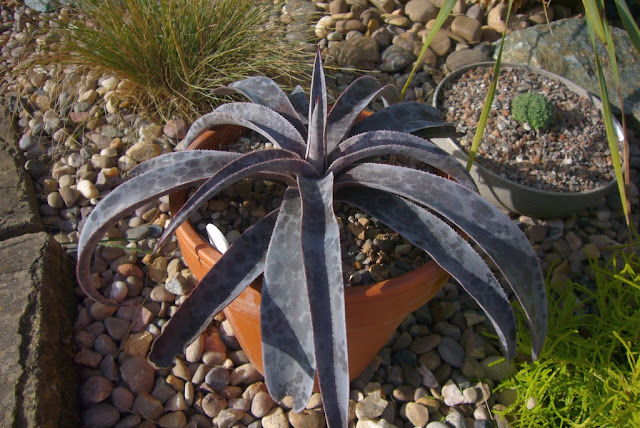 That's the closest I have managed to get to the colour, it is properly blue.  It has grown at the same speed as the wavy forms, and like those hasn't offset yet. I think this one is going to be one that deserves being somewhere on display. Not quite hardy for me, and given that it hasn't offset it will be put somewhere and kept above -5.

The ones that have stood out from last year purchases are the more structural ones, the faster grower has been m. mission to mars. 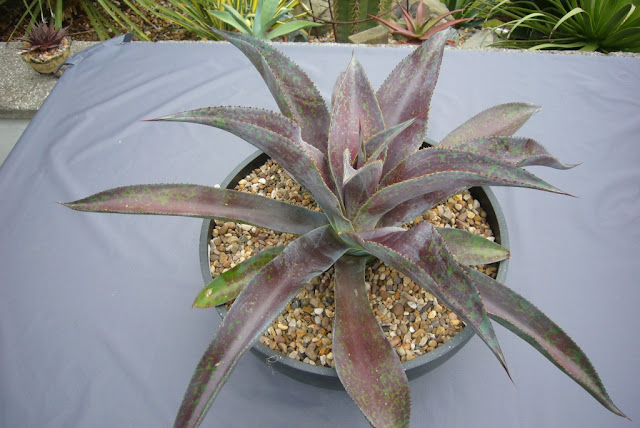 It is already a decent size and a good structural form and colour.  It will make a really good focal point but will no doubt also stand it's ground if grown among other plants. It should be hardy for me, although sadly it has not offset so I am not sure I would risk it until I know I can get a replacement.  The growth is going to be a bit of a problem with the rapidly growing collection.  As mentioned above it makes a huge difference how they are grown: large pots and more water gives you much more growth.  I am now considering restricting both he pot size and water to try and slow them down a bit.

The other fast grower is m. pineapple express. This has to be one of my favourites and it offsets nicely as well which is a bonus. 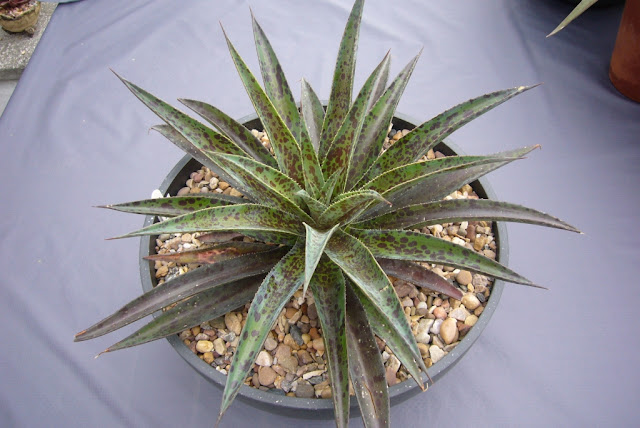 I love this one and I've had it in one of the most prominent locations in the garden. I would love this to be hardy and to be able to plant a few in the garden.  Sadly I don't think it stands a chance in a bad winter and may struggle in an average one.  Given I have a few spares I am actually going to see how it copes in a cold frame this winter. Fingers crossed I would love to be able to grow a few larger ones and don't have to space to store them somewhere warmer.

From one that has really performed to one that is ticking along, m. lavender lady.  You can really see the parentage in this one and sadly that means it is not hardy at all. 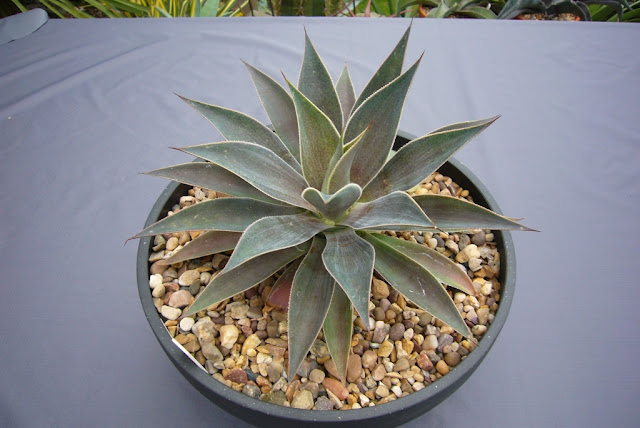 You can see the potential in this one and also that the colour is going to vary greatly depending on where it is grown.  I think I will probably move it to a smaller pot, it hasn't grown to fill the pot like the others, plus it would make it easier to bring inside over winter.  It has no hardiness at all, listed as Tropical, whatever that means.  It is sad that it needs to be inside, hopefully it will be worth it.

The the final one from last years searching is m. silver fox.  This is the most agave like of the first group and has an even better colour than lavender lady. 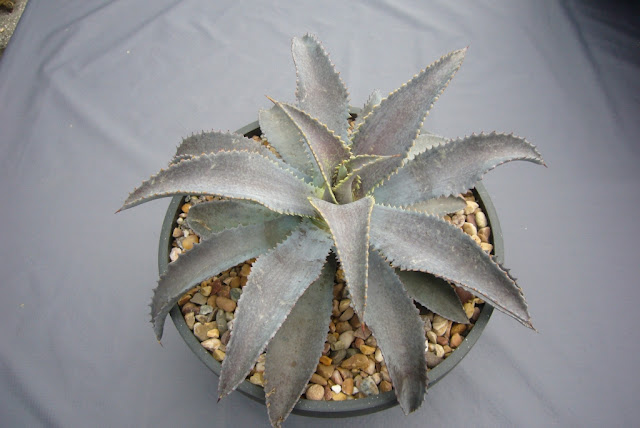 As you can see it is a fast grower, sliver blue in colour as the name suggests.  Another one that likes to send out pups. It's marginal for me apparently, so I'm going to try one in the cold greenhouse to see how it copes.  I'm looking forward to seeing this one develop into a specimen plant as it will be a one to have out on show.

So that was up until the end of last year. I will get onto this year in a second post.
Posted by Spiky Obsession at 21:19

Email ThisBlogThis!Share to TwitterShare to FacebookShare to Pinterest
Labels: Manfredas and Mangaves