Time for some plants.  The idea is to select the 3 best of plants in each group: agaves, aloes, yuccas and echeverias.  As a recap, all the selected plants should be hardy down to -10C and require minimal protection. This will be easier in some groups than others, so I thought I would start with an easier one, the agaves.

1) Agave parryi. You can't select hardy agaves without mentioning this plant, with the plus of different forms to select from.  You can chose from wide or narrow leaf, colours from green to pale blue, and different size and colour teeth. These are two of mine which show some of the differences. 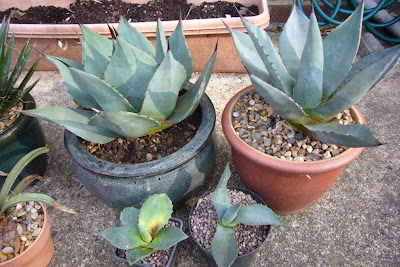 Most seem to be hardy when mature, but some seem to cope better when small than others. When looking for plants, it is always worth see if you can get a pup off a plant that is already growing outside.  If you are not sure give it protection the first year, so it has time to get established. A simple plastic cloche over the plants to keep the worst of the rain and snow off should be more than enough for this plant.  For my larger plants shown above I simply cover with fleece to keep the snow out of the crown. The plants do not need this to survive, but it keeps them in top condition. My favourite form is a. parryi HK1684, not a very attractive name but the plant is a good blue colour and has the best dark red teeth. 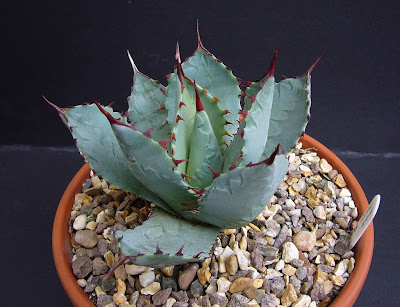 This one was a little small to be planted, but it has grown a lot and is now getting to the size where I would be happy to plant it out.  To get it ready it is left outside over winter but kept dry. I will probably repeat this for one more year and then plant it next year.  In case you are wondering, given that you often see the variegated versions, they seem just as cold tolerant even from a small size.  I have not tested one planted yet, but again kept dry they get you through without problems.  Whichever variety you go for you will no doubt end up with a lovely clump as they pup quite freely.

2) Agave bracteosa. Not the most popular, some say due to the fact it doesn't look like a proper agave, but very hardy from a small size.   I don't even bother to fleece mine before snow and it never even marks, maybe because the leaves are thinner and more leathery.  While it looks like it doesn't have any teeth, the edges to the leaves are sharp and give similar to paper cuts.  I think this plant is actually a safer bet than parryi and I have it is a shame it is not more popular. 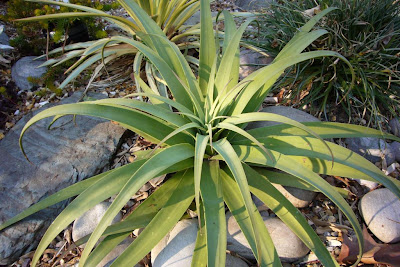 There is only one normal form, although there are a couple of variegates.  The most common is a. bracteosa 'Monterrey Frost', these are so expensive and hard to come by in the UK there is no way I would risk mine outside.  I am jealous when I see photos form the USA where these now seem to have even made it into nurseries in bulk.  Hopefully at some point someone will let me know if theirs copes with snow the same way as normal form. 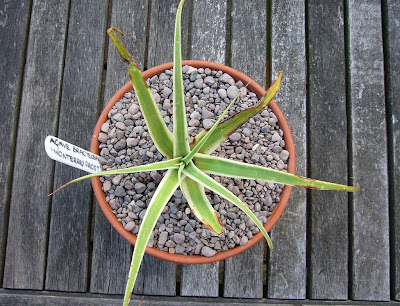 3) Agave montana. If I was only going to select three agaves, then a. montana would have to be one as it is the one that grows best in wetter climates.  There was a lot of hype about this plant when it first came onto the market, the fact that it grows at high altitude in or on the edge of forest.  Two bad winters in the UK and lot of people are now less impressed with this plant.   I think they were being a little harsh, OK it is not the super agave we all hoped for, but part of the problem is people planting tiny plants. This is one that grows into its winter hardiness. In the UK I think plants needs to be at least 30cm across to be fully hardy.  Once they get to that size they seem to have little problem with our wet and cold.  With small plants, I find just keeping them dry is enough the cold is not the problem.  Then with larger plants I just keep snow out of the crown. 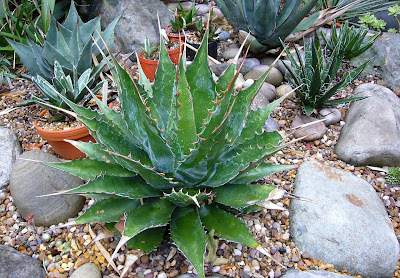 There are a few other agaves are equally hardy (which I'll come to in a bit), but this one made it into the top three because of its lovely red spines and its very structural form.  If a. bracteosa is not agave enough for you, then a. montana is the plant for you.  Sadly it is unlikely to offset, to you have to plant your own clumps.  Leave plenty of space though as they fill out very quickly even in the UK.

So there are my top three hardy agaves. To be honest there are a few others, that could be in the list (probably in the place of a. parryi as the least interesting of the three).  Here are some of the best of the rest:

Agave x nigra.  A very hardy plant and well worth a place 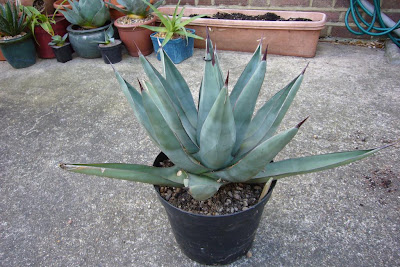 Agave filifera. I was surprised that this one copes in my dry bed.  I put a cloche over my larger one as I really want to keep it pristine. 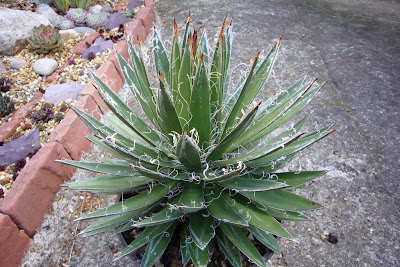 And some the jury is still out on, they should be OK although can be very variable, but well worth space if especially if you are going to use rain covers.

Agave gentryi, a close relation to a. montana.  This is famous for the teeth on the leaf margin.  There is a form called 'Jaws' due to having huge teeth. These have done OK for me with on the snow kept out of the crown.

Agave weberi.  Another of the toothless forms, this one gets good and big.  There is a lovely wide leaved version which is worth tracking down if you can find it.

Agave victoria reginae. This is another that has really surprised me, I have two planted out, one with a rain cover and one without and while the rain cover has helped, it does not seem to have made as much of a difference as I expected.   These are slow at the best of times anyway, so it is difficult to know if they are struggling or not.

Agave mitis.  Used to be a. celsii and you often still find it sold as such.  Quite a soft leaf and is a slug magnet.  Damaged leaves will rot come winter, but if you can keep the slugs away it is fine with just fleece to keep the snow off. There is a gorgeous blue form which is well worth looking out for as a specimen plant, although don't plant it as the rain will spoil the look.

Agave salmiana var. ferox. A good chunky plant. There are reports this is hardy, but mine struggle without rain covers and were killed with snow in the crown.  It is worth a go with rain cover, but I don't think it is reliable without them.

So those are the agaves, as you can tell, I think there will be more than three varieties in the bed.  Please feel free to post your top 3 hardy agaves.
Posted by Spiky Obsession at 20:03